A new gene-editing technique based on CRISPR was used to successfully avoid the development of a liver disease that can be caused by hundreds of mutations, as well as to ease the symptoms in mice. This proof-of-concept study was published online in the journal Science Advances in February 2020.

The CRISPR technique is a modification of a previous method developed by researchers at the same institution to eliminate just one genetic defect. The researchers adapted the original method to correct the genetic condition caused by the deficiency of the key enzyme ornithine transcarbamylase (OTC). 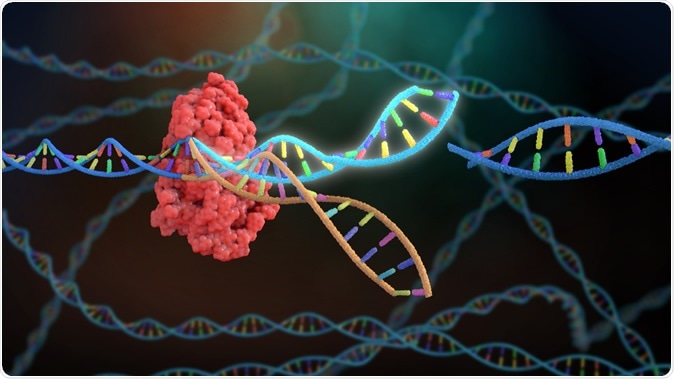 OTC deficiency occurs in about 1 in 40,000 babies born alive and may be due to over 300 different mutations on the OTC gene, located on the X chromosome. OTC is essential for the normal functioning of the urea cycle.

The urea cycle is a 6-enzyme process that converts toxic ammonia into less toxic urea. A defect in any of these enzymes results in the build-up of ammonia in the blood, and thence to the brain. This toxin causes damage to the sensitive nerve cells of the brain and may even kill the patient.

Since the X chromosome is present in only a single copy in males, the defect becomes evident at birth, mostly in males. Females have 2 X chromosomes, so unless both carry a defect on this gene, the condition is not clinically manifested. Instead, the female with a defect on only one of her two OTC genes becomes a carrier and can pass on the defect to half of her potential offspring. Other mutations on the same gene produce various other genetic conditions.

Early treatment is essential in most genetic disorders because of the typically early expression of the abnormality, which can hinder normal development. Current therapies focus on clearing out the ammonia by other pathways that are stimulated by medicines. If the defect is very severe, a liver transplant may be required. On the other hand, too many of these patients die, and clinicians who see this condition often are continually seeking improved treatments.

The earlier technique was too specific to treat this disease in which any of the over 300 mutations might be present. Therefore, the team focused on designing a genome editor with a broader field of application. This is based on the introduction of a minigene, or a set of protein-encoding instructions, into the liver cells, by a viral vector called an adeno-associated virus (AAV). The minigene doesn’t alter the defective part of the gene but adds a new set of instructions by a “cut and paste” type approach.

For this, they first built a customized dual AAV vector that contained Cas9, a bacterial protein that is guided by RNA to identify and edit genes within cells rapidly. This new vector is called AAV8, and it migrates explicitly towards the liver cells. The second AAV has a minigene that contains the donor DNA encoding the human OTC enzyme. This functional minigene is regulated by a promoter sequence that is specific to liver cells. This safeguard ensures that it will be expressed only within liver cells after being injected into the blood via the AAV.

The Cas9 first nicks the DNA strand at the target site within the gene sequence. This is the “cut” part of the process and is followed by the “paste,” where the minigene is added via a repair process called homology-directed repair.

The addition allowed the newborn mice to develop in a much healthier manner. At three weeks of life, 25% of the liver cells were expressing OTC, and at 8 weeks, 35% were showing this expression. This may seem like a modest difference, but is still three and four times the effect produced by the use of the untargeted vector at these time points, respectively.

When the liver was examined at these time points, the researchers found clusters of OTC-producing cells situated throughout the liver more or less uniformly. The difference persisted into adult life. Even on a high-protein diet, the targeted mice showed ammonia levels 60% lower than in untreated mice.

The difference is explained by another researcher, Lili Wang: “Unlike other CRISPR approaches that delete or modify a portion of the normal gene, this technique integrates a new portion. We’re not trying to correct mutations that stop liver cells from producing OTC; we’re adding this new minigene so the cells can.”

The study shows that this new CRISPR-based technique may be adapted to prevent the clinical manifestations of a rare genetic condition caused by multiple mutations. It could also be used to alleviate other hereditary conditions caused by other mutations of the same gene. The critical feature of this approach is that it uses one strategy to combat a condition caused by a number of mutations at different parts of the genome, and not just one chief mutation.

Researcher James Wilson explains: “Here, we moved a CRISPR approach forward to not only sustain expression of OTC in the cells but also broaden the tool’s abilities. We’ve moved closer to a potential ‘broad spectrum’ gene-editing approach to treat patients with the OTC deficiency, irrespective of mutation and clinical state. The next step, through additional preclinical studies, is to find a safe harbor site on the gene in human liver cells and then to test a similar gene-editing approach.”